This piece is round, but arches out in the center in a shallow convex dome shape. The outermost layer is made of silver-colored soldered metal rings, and provides most of the structure. The rings are slightly different sizes, and fill in the dome with a 9-way repeating pattern. The back panel is covered in white fabric.

The LEDs are animated in a variety of hypnotic patterns. By default, it will cycle between these patterns when it is first powered up. It can also be set to play one of the patterns continously, with a built-in mode switch on the back panel. 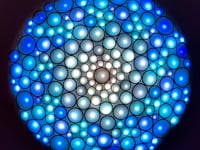