This piece is round, but arches out in the center in a shallow convex dome shape. The outermost layer is made of silver-colored soldered metal rings, and provides most of the structure. The rings are slightly different sizes, and fill in the dome with an 8-way repeating pattern. The back panel is covered in black fabric.

UPDATE: This piece was selected for the 2nd Annual Surfing Madonna Art Show, opening in October 2022. It was also awarded "Best in Theme for Sculpture" by the jurors. 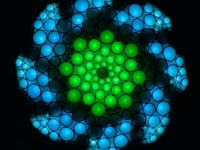