The Flying Tentacle Monster was a collaboration between Janet Hansen and Brett Spivey, and was installed in the Black Rock Desert at Burning Man in August 2013.

The art theme that year was "Cargo Cult," a reference to the phenomenon where a visitor with mysterious technologies might be perceived as a godlike figure with magical powers, influencing the local culture and spiritual practices. The artists chose to take this in an interplanetary direction, building the alien child of an octopus, jellyfish, and electric eel.

The name pays homage to the gospel of the Flying Spaghetti Monster. Our sect is less pasta-oriented, and more interested in magical lighting, but we won't be offended if you prefer to interpret this as an illuminated flying meatball with dangling noodles.

The structure is illuminated with a variety of pre-programed effects. The sheer fabric cover on the upper sphere provides diffusion, softening the light in that area. The strips of light inside the tubes/tentacles have closely-spaced LEDs which are animated with looping video clips that move in a variety of directions. In some cases, vertical bars of light spin around the cylinder. In others, illuminated regions of the tubes move upward or downward, as if the upper body is exchanging energy or information with the spheres at the ends.

There is a hollow plastic sphere at the end of each tentacle, containing randomly twinkling ultraviolet (UV) LEDs and several UV-reactive green bouncy balls that could represent developing eggs.

The lower part of the supporting structure is black, so that the entire piece appears to be floating or flying in the dark. The tentacles are flexible, and will sway back and forth under windy conditions.

The clip below shows some of the animation patterns. The patterns are randomized by an alogorithm that recombines effects, so that it would take several hours to see all possible options. 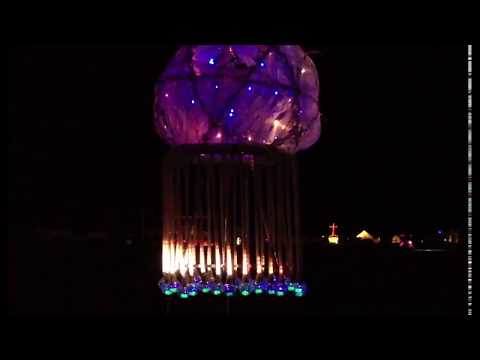